The weddingest songs from the weddingest month. For wedding DJs in Chicago, there's no busier month than October. That was especially true in 2016, when our performers found themselves contending with several theme weddings, a lot of 90s hip-hop - and one World Series.

Every Monday, I ask our DJs in Chicago a question: Which songs killed it on your wedding dance floors this weekend? Here's how they answered for October 2016.

Here's how we brought the party in October:

It won't surprise you to hear "Go, Cubs, Go" was a pretty big hit at events all over Chicagoland this month! But TJ's playlist takes the cake for happening at a wedding for two die-hard Cubs fans on the day the Cubs won entrance to the World Series.

1. Return of the Mack - Mark Morrison

3. Back that Azz Up - Juvenile

3. Don't Stop 'Til You Get Enough - Michael Jackson

Your results may vary, but for this group of guests it had a personal connection and the dance floor just - well, you know. Caught on fire.

2. All My Loving - The Beatles

The set above was part of an all-oldies wedding, at which Vince played nothing but 50s, 60s and 70s music for 6 hours - and no disco. Further proof that with the right DJ, your wedding does NOT have to sound like everybody else's.

Want more wisdom from our wedding DJs? Subscribe to this blog and keep the good stuff coming every week. 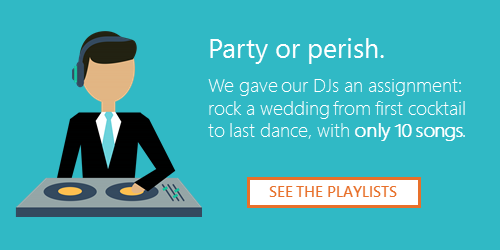